BAINBRIDGE ISLAND – Developers hope to begin construction on a large residential development on the east end of Winslow Way this summer.

The Bainbridge Landing community will have a 107-unit apartment building and 25 townhomes on what’s currently a largely undeveloped 4.8-acre site just south of Gilmore Way, between Cave Avenue and Ferncliff Avenue. The project is the first joint venture between two of Kitsap’s biggest developers, Olympic Property Group and Sound West Group.

The Bainbridge Landing community will have a 107-unit apartment building and 25 townhomes on what’s currently a largely undeveloped 4.8-acre site. Nathan Pilling

The apartment building will vary between three and four stories in places and will have studio units up to three-bedroom units, said Jon Rose, president of OPG. The townhomes will be three stories tall. Under-unit parking will serve the residences.

The apartment building will have community spaces, an exercise facility, bicycle storage space, a dog-washing station and a rooftop deck, developers said. It and the townhouses will be well-appointed, Rose said, and “fit the level of quality you’d expect on Bainbridge.”

The development will also have a one-acre park on its east end that will eventually be passed on to the Bainbridge Metropolitan Park District, Rose said. Developers are working to determine whether a historic home in that area will be moved or remain at the site. The home has been owned on and off by the Cave family, one of the island’s early families after settlement, since about 1900. 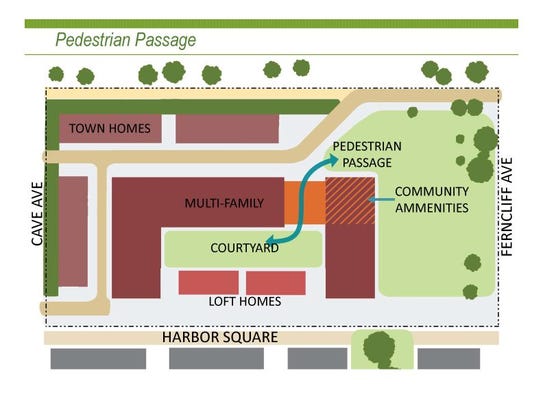 With all the amenities, “The idea is this isn’t just a building,” Rose said. “This is a place where we’re using the design inside and outside the building to create a neighborhood.”

After studying the traffic flow out of the Harbor Square Condominiums, which currently sit just south of the new development site, the two developers said they expect a reduced traffic flow because of the site’s proximity to the ferry terminal.

“The project puts a lot of density in the smartest place you could put density,” Rose said.

The project has passed city site plan reviews and is heading to construction permitting. The partners hope work at the site will begin this summer and expect it to last 18-22 months.

The Roxy revival is real! Far Away Entertainment to operate Roxy Theater
Scroll to top